Payouts on income annuities have been low for years.  It’s a situational problem since in some scenarios a person can get a really good deal.  But for the average retiree the numbers don’t always seem to be compelling.

Early in 2020 I decided to introduce people first to the most complex use of the Flex Strategy to show just how much better the numbers can be if you use the right strategy rather than relying on an annuity alone to produce a safety net in retirement.  For anyone who has been around a while it wasn’t much of a jump to see an index annuity used primarily as a portfolio management tool.  For those who are new, however, I left out some critical points in the middle.

I’m going back to the basics so that anyone who doesn’t have enough information to make the connection will hopefully add these building blocks on their way to a complete understanding of how best to use annuities in retirement.

Over the past couple months I have run into several cases that are similar to the one I’m going to show you.  The specific premium amount doesn’t matter so much because the math works out the same no matter how much money you have.  Rather than explain the full details of this case I’m just going to show the numbers to illustrate the difference between two ways to approach retirement income.

For one couple in their late 50s we looked at using $300K to fund guaranteed lifetime income that would start in about one year.  It’s easy to find the highest guaranteed income payout for any situation and takes no more than a 5 minute search in a database.  In this case it was Protective Life that would offer the couple $13,260 annually, guaranteed for life.  Age, single or joint life and the number of years you will defer will produce different results for every person and that’s why an independent broker is important.  What works for you most certainly won’t work similarly for another person.

The table below shows what this contract would look like with growth, fees and income all taken into account over a 20 year time period.  I didn’t call the company for an illustration because I don’t plan to sell this but the numbers are plenty easy to recreate using the past 20 years of the S&P 500 along with the maximum cap rate for growth offered in the contract.  In exchange for the year of deferral, the income base is increased by 4% to $312K and a 4.25% payout rate produces the income figures, while the annual fee is taken from the account but calculated using the higher income base. 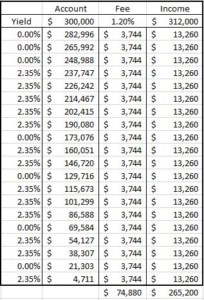 As you can see, after 20 years, fees amount to nearly $75K, total income is still less than initial premium and there’s not much money left in the account.  For these guys to not only get their money back but also capitalize on the contract they would need to live well into their 90s.  For older individuals the payouts would be higher but you’ll collect it for fewer years.  In most cases it’s six of one and a half dozen of the other.

Why do people do it?  Aside from not knowing about any other options, there are two major benefits to doing it this way.  First, bonds would only provide about half or maybe less than that for income.  While the bonds would have a residual value that is greater, a person would need additional funds in something else to match the income so that essentially says that using bonds would be much more expensive and definitely more risky.  Second, some people enjoy the carefree nature of knowing a check is coming in the mail every month and will continue for life.  It’s easy and takes a lot of pressure off retirement concerns.

Still it’s been hard for me to justify a low payout even if the actuaries and Monte Carlo simulations prove that it helps a portfolio.  Plus, most everyone else is selling it this way and if I can’t differentiate myself then there would be no point to any of you doing business with someone in Montana.

I realized there could be a better way years ago when I added up the fees on one contract and added them back to the residual value of the account.  Let’s also not forget lost opportunity cost.  If those funds had not been subtracted they would have grown also.  In the above contract, the $74,880 paid in fees would amount to an additional $90K remaining if the fee had been zero.

You may also notice that in the above contract there isn’t much growth to begin with.  2.35% maximum annual returns shouldn’t get anyone super excited about signing away a big sum of money.  Where other contracts without income riders have no fees and also come with growth potential that can be more than twice as high.

The below example shows just such a growth contract with a similar premium, no fees and a conservative blend that produces an average yield of 4.21%.  Using free withdrawals that match income payments from the guaranteed income contract you can see that the residual value matches or exceeds the initial premium throughout.

The benefits of doing it this way cannot be understated, even if you doubt the ability of the contract to yield that well over time.  If this contract yielded 0% then income payments would last for almost 23 years.  If you split the difference on yield then more than half the money would be remaining.  Of course you all should know that we can take this even one step further and make it even better but that’s not the point.

Why an annuity at all?  Perhaps any doubters can tell me which asset would be better.  As for 20% more income, use your imagination.  Clearly a larger remainder means you could withdraw more aggressively or even allocate less to the annuity in the beginning.  Either way you slice it, you get more by doing it this way.

Again, there are several benefits to using this strategy, not the least of which is more control over your money and flexibility to make changes throughout retirement.  There are all sorts of caveats, disclaimers and unique situations that make this different for everyone so comment below or respond to my email if you have a question, suggestion or disagreement.  For my benefit and yours this doesn’t need to be four times as long.