Everybody wants it.  Salesmen promise it without regard to reality and I always say it’s possible but don’t expect it consistently.  Honestly I’ve seen it happen several times and the likelihood depends a lot on crediting methods or the index tracked, not to mention a pretty hot stock market.

This is not the highest I’ve seen, just the most recent and performance is always a popular subject so I’m sharing a statement from a renewal last month.  The owner purchased this contract in January 2019 and just completed the first year, during which the market did really well as you know.  But a year ago everyone was pretty nervous so we didn’t know to put all the funds in the S&P 500.  Instead we split it up with a hedge on the gold allocation and some diversity with a balanced mid-cap index.  All performed well so the blended yield came out well ahead of our reasonable projected average.

Here’s the statement, redacted of all personal information: 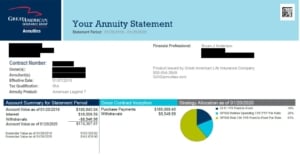 I’ve had some people complain that earnings are never expressed as interest on these statements.  Maybe some do but not the ones I use.  So unfortunately we have to do a little math.  The contract was purchased with IRA funds for a total premium of $166,669.48.  This gentleman was over age 70 so an RMD was taken before the year was up.  $8,546.56 in withdrawals did not earn any interest because it was taken before the end of the crediting period.  So interest earnings of 16,008.59 was credited only on $158,122.92.  This results in total interest earnings of 10.12%.

Interestingly, his surrender value is over $161K.  With the RMD taken into account his earnings more than offset the surrender charges just one year into the contract.  He could walk away today with more than he put in the annuity just one year ago.  But why would he?  Yes the market did better over the period but the annuity is locked in value.  If the market keeps going the contract will yield again and if the market drops he won’t lose a penny.  He certainly doesn’t have to worry about losing a few percentage points of value just because an infected bat attacked a scientist in China, or whatever explanation is making the news today.

It’s about security and consistency and getting the highest yield on your safe money.  Simple as that.  Plenty of people passed up the opportunity but those who didn’t were fortunate to have money protected and still achieve a healthy gain.  I’m not going to blow a bunch of smoke this week.  You all know how to get a hold of me.