Which Annuity Would You Choose?

I ran into a standard example last week when Sharon scheduled an appointment and asked for me to review an annuity proposal she had received.  Without naming names I’ll say that the proposal came from a large national firm that advertises aggressively for index annuity sales.  I know well how the company works and have had issues with several of the advertised claims over the years.

This time it was no different.  The proposed contract would produce exactly the amount of income Sharon needs in five years and she was also told she could expect healthy account growth giving her additional access to the money, long term income increases and a substantial remainder after 20 years or more.  It’s the last three things in there that are misleading.  It’s fine to purchase guaranteed income products but doing so under the wrong assumptions will set you up for disappointment.  If one of the overstated benefits is meant to provide something necessary then not getting it could cause financial hardship.  That’s why we have to be careful with recommendations in this business.

This is a different way of looking at the same issue I’ve been writing about for a long time.  Many other advisors are jumping on board with this strategy now but I can document my research on it all the way back to 2005.  Yes, I’m not afraid to claim I was the first person doing it this way.

Let’s talk about this case.  Sharon was planning to put about 40%, or $500,000 of her assets into a contract that when combined with social security would fully meet her income needs when she retires at age 68.  The illustration shows guaranteed income of $35,000 annually in five years.  That hit her goal perfectly so she is seriously considering buying the annuity.

In order to determine whether that’s possible we need to look at the growth potential in the contract.  It happens to be one of my old favorites.  The advisor suggested the JP Morgan Mozaic II index as the best way to make all the good things happen in the contract.  The only option within the contract requires a three year crediting term and the agent produced numbers that show the index has averaged more than 8% historically.  Why don’t we look at the past three years to see if it’s a realistic claim? 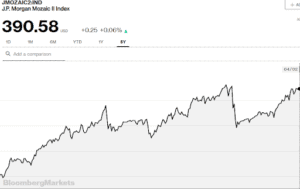 Final yield of 7% in three years

Also you need to subtract the fee for the income rider which is 1.1% annually

You would have guaranteed lifetime income but your account will barely grow and once income withdrawals start the account will drain quickly.  My educated guess is that the account value will go to zero sometime around the 20th contract year.  Sharon would still have guaranteed income but that’s with no additional withdrawals, no income increases and no remainder account value when it’s all over.

Sharon doesn’t want to pay a fee but she is beginning to come to terms with it because the product hits her future needs perfectly.  So I was tasked with finding options to see if it could work the same way without paying a fee.  Again, without mentioning product or contract let’s see how a different growth opportunity works to solve her problem.

This is not the first time I’ve mentioned  the S&P Multi Asset Risk Control index.  It is offered with one and two year reset options so let’s see how it did in the past two years?  That will get as close as we can get for comparison.

If you are going to skip a guaranteed income rider because you want no fees, more control and more flexibility with your assets, there are several things to consider.  Most importantly, how much is left down the road and will the account hold up to substantial withdrawals?  Here’s how that looks with similar withdrawals:

3% average growth leaves remainder of about $250K in 20 years

A lot can be accomplished when you avoid fees but it’s not for everyone.  The payouts for a guaranteed income contract is higher in this case because it’s a single life payment.  For anyone wanting a joint life payment the alternative without the guaranteed income is going to look even more compelling.  Just imagine how much more money would be left in the account if the income payments aren’t as high.

There is also a faulty assumption that in either case you have to keep the annuity for the rest of your life.  If you have fees, low growth and high income payments there might not be much money left if you want to do something different but you still can.  Knowing that a change in planning may be needed the alternative without fees produces more growth and makes additional opportunities more likely if interest rates rise or plans change over time.

Curiously enough, the quoted income contract was not even the highest paying contract on the market.  I found one that produces a few thousand more annually in five years.  That means Sharon could spend less money for the same benefit.  She has a decision to make but at least I’ve got some good news for her.

So let me know.  Which annuity would you choose?

3 thoughts on “Which Annuity Would You Choose?”