Will This Election Ruin Your Retirement? 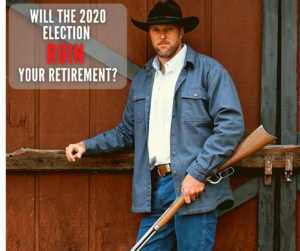 SPOILER: I really don’t think so.

Regardless, dozens of people have commented that they either need to do something before or after the election.  There is a fear from both sides that things in this country will go south if the preferred candidate doesn’t win.  Will taxes go up?  How will health care change?  Will the federal government have more control over us or less?  These are all intentionally general because I don’t want to try convince anyone either way.  There are literally dozens of issues I could talk about but this isn’t a political website so I’m just going to try to tell you why none of this matters in the long run.

I’ve written about the need to ignore single events when making long-term plans but this is a bigger one that may have ramifications for years to come.  It doesn’t mean you should make major moves just because of this election so relax and think about your options rationally.  Doing that may help you realize there are issues other than the election that make retirement planning more challenging.

I’m going to give you three reasons why the election shouldn’t be an indicator for major investment decisions.  Focus on your own personal reasons for making changes so you don’t have to second guess an ill-conceived strategy.

First, the stock market doesn’t care whether a Democrat or Republican is the president.  The stock market reacts when the incumbent looks to be challenged because the rules may change in a new presidency.  The stock market likes certainty and when the rules change there may be a slight dip while profits are taken at the top but the market usually bounces back once the new economic environment is known.  Traders keep trading and businesses move forward because that’s what America does.

Second, it is rare that one political party controls the presidency and both houses of congress.  Because there is typically a division between the executive and legislative branches of government, there tends to be slower movements for or against the issues that you feel are important.  Major changes can often be delayed or outright crushed by either the house or senate.  I agree with anyone who says the Founding Fathers were geniuses.

And finally, major political parties have been running up the deficit since 1930.  While Clinton claimed a balanced budget in the late 90s, there is debate about how the accounting was done and the federal deficit actually increased over those years, albeit at a much slower pace than in the years since.  Excessive government spending makes interest rates a political tool rather than an indicator driven by purely economic forces.  Lax monetary policy is a far bigger threat to your retirement than either political party because it keeps interest rates artificially low.

I think there is one thing currently happening that is far more important than the election in six weeks.  Stimulus money is running out and the economy hasn’t fully recovered from Covid-19.  Some lockdowns are still in place and it will likely be awhile before we’re moving forward full-steam again.  Raise your hand if you got out of the market before it recently lost almost 10% from the top.

When looking at one single event in time, it’s tempting to use it as justification for making moves that you should probably be making for other reasons.  Perhaps it would be more important to really define your goals and expectations first.  I think a lot of people fail to act because they don’t know what they want.  Keep your long-term goals in focus and forget about single points in time.  If the election motivates you to make a major financial decision then you probably should have done something well before now.

Enjoy your weekend and comment below if you have something to add.

4 thoughts on “Will This Election Ruin Your Retirement?”