A Clear-Cut Case for Annuities 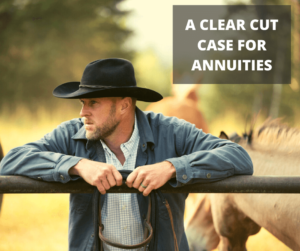 Not everyone gets to choose when to retire.  Quite often I meet people who have been forced out of the workplace for any number of reasons.  When this happens, retirement decisions have to be made when people are not mentally prepared.  This year it has been a much more common occurrence because of Covid layoffs and a shaky economy.  Sure, the stock market is doing fine but that doesn’t mean we are all as financially healthy as we were a year ago.

No one likes to have major decisions forced upon them.  It’s one thing to feel sales pressure but another completely to feel as though you NEED to do something.  No one likes to be told what to do and when someone forces a major financial decision on you, it’s within reason to be skeptical.

There is almost never a clear-cut case to use an annuity.  I define clear-cut as an unequivocal justification for using an annuity to meet a specific goal.

This week I had the privilege of speaking with one woman for the first time.  She was laid off from her job a couple years ago, way earlier than she had planned, and has had a difficult time of finding the right job because of Covid-19.  She is nearly 64 years old and is now approaching the age she had planned to retire but the past couple years did not allow her to approach it on her terms.

In her mind that put her retirement plan in jeopardy so she has been out meeting with local financial advisors to help her figure out how to do it.  Initially she had planned to collect social security at either 64 or 66 but after living conservatively off of savings for a while, the drive to maximize social security has increased.  Many people are the same, looking for maximum assurance because of a lack of confidence in available advice.  Could that mean that many advisors won’t give you answers because they have the same questions as you?

It’s only a matter of simple math so it doesn’t take long to determine whether a person can retire, but it does take time to educate a person against mainstream information and restore individual confidence.  In this case the answer is simple.  It turns out that this lady could take social security in a couple months and that alone would cover almost all of her living expenses.

Aside from that she has a very reasonable amount of money saved in both Traditional and Roth IRAs so has no demonstrated need to tap into either.  Any of the spending she might do from retirement accounts would only be on a discretionary basis. If she spent around 5% of her savings each year she would have more than enough to survive and be happy until well into her 90s and likely beyond.  Since spending 5% of her assets each year is not in her plans then it seems as though she has plenty of options.

This is a very basic example that does not represent a clear-cut case for annuities but it’s a real example.  She hasn’t been working for two years and may feel as though things didn’t happen on her own terms but it doesn’t mean that everything she wants isn’t possible.  This didn’t stop another advisor from recommending she defer 60% of her assets in an income product requiring ten years of deferral.  In what world does that make sense?

She may need additional “discretionary” income now but I can’t even imagine a scenario where locking up assets for ten years or more would be beneficial.  There is no need in ten years, the need is now.  Deferring income for several years when she doesn’t need it in the first place will only extend the current stress she is feeling.  There is no reason to do that when retirement is a financial homerun, as it is in this case.

Many of the retirement commercials you might see on TV show you a seemingly successful person or couple who have worked hard and saved plenty but are still stressed about whether they can retire as planned.  That is misleading to say the least.  It makes it sound like retirement planning is really difficult but if you have worked hard and saved plenty then retirement is easy.  I’ve got a 7th grader in the house and her math homework is harder than that.

There is no clear-cut case for annuities, but there are several reasons to use them that will make retirement easy.  Too many people spend time focusing on what annuities can’t do that they fail to realize all the things annuities can do.  You don’t have to defer income for ten years, you don’t have to take income at all.  There are lots of ways to use annuities and it all comes down to protection.  What do you want to insure?  Income, market volatility, inflation, control of assets or legacy?

I wrote about it last year if you forgot or were absent:  Annuities Are Not Just for Income

Those things are mutually exclusive so focus on what’s most important to you and keep it simple.  Annuities are a choice and in many cases better than the alternative.  Don’t make your decision too complicated and let me know if you’d like to boil it down to specific terms.